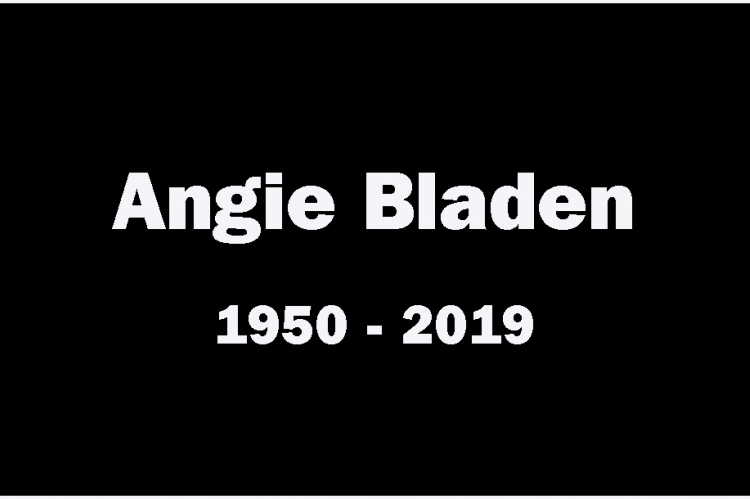 The news of the passing of Angie Bladen on 8 November 2019 was met with a real sense of loss throughout the folk scene in the UK.  Through her coordinating roles in various clubs and festivals over many years she touched the lives of countless people, and she will be remembered as a skilled and committed organiser, as well as a good friend and a relentless encourager of people.

Angie was involved in the folk scene from a young age.  She lived in London at a time when the scene was thriving, and started her organising career there, running the Capricorn in North London, which later moved to Potters Bar.  Even in these early days, her clubs always had a leaning towards the more traditional musicians and singers, and this was a feature that would become a hallmark of the other events she organised over the years.

In the mid-70s, Angie moved to Cornwall (initially for a summer, but she ended up staying for three years).  She became involved in the folk scene there, but returned to London when her mother was ill.  It was there she met and married Ken, who became her partner in organising as well as in life.  For work reasons, they moved to the Midlands and it was while they lived in Redditch that they teamed up with two others to form the Four Fools Festival committee.  Thus began the Four Fools Festival, renowned for its commitment to the promotion of traditional music and song.  The festival ran for many years in several different locations, following Angie and Ken in their various moves, but was always held in great esteem.  Angie and Ken also ran folk clubs in Headless Cross, Adlington, Standish and Upholland.

Angie was an English concertina player, and a fine singer of traditional song herself, but rather than push herself forward, she always made the effort to include and enable other people.  She also enjoyed instrumental sessions, and latterly started some ‘Slow & Steady’ sessions, where the aim was to play at a speed that did not leave anyone behind.  She was a prolific knitter and crocheter, and was regularly seen arranging or attending craft fairs where she helped to raise lots of money for charity.

Angie’s funeral took place in Saltburn on 25th November and, appropriately, many of her friends met for a final Four Fools gathering after the service.  Angie and Ken’s valuable contribution to the folk scene cannot be underestimated.  As one friend, Clive Pownceby said: “The warm and friendly atmosphere and the simple good cheer they both generated are things to be cherished.”