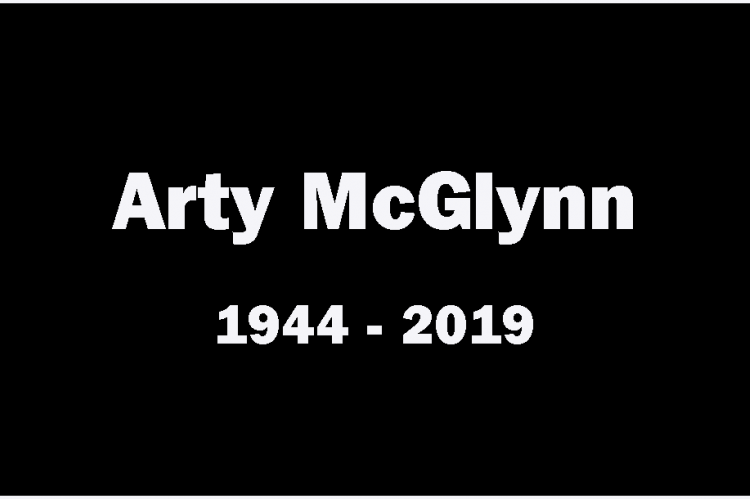 Irish guitarist, Arty McGlynn died on 18 December 2019 in hospital in Enniskillen after a long illness.  Known the world over as one of the most creative and innovative players of Irish music on the guitar, he is widely credited for bringing the instrument into traditional Irish music’s mainstream.

Arty was born in the townland of Botera in Omagh to a musical family – his mother played the fiddle and his father the accordion.  He began playing the accordion himself at the age of five and was soon able to play some tunes on it, but at the age of 11 his mother gave him a guitar and a lifetime’s passion for the instrument began.

At this stage, Arty stopped playing traditional music, saying that during these early years he had “a love/hate relationship with Irish music”.  He found that when he heard the music in school it was too strict and conservative, with everyone playing in unison and not much to attract him to it.  As a result, he developed an interest in other types of music, initially listening to people like Chuck Berry, Jerry Lee Lewis and Gene Vincent, which developed into a love of jazz.  By the age of 15 he was playing professionally with showbands and rock bands, and soon became in demand as a session musician for recordings.

Arty described this time with the showbands as one of great learning; a time when he learned his musical theory.  He had to learn to read music charts and play different types of chords while with working with them.  He honed his craft and garnered all kinds of experience while on the road and in the studio with these bands for around 18 years.  As time went by though, boredom set in and he started taking out the acoustic guitar again.  Bands like Planxty had started appearing; bands who were doing something different with Irish music, arranging it and using different instruments to play it.  This stimulated Arty’s interest in Irish traditional music again, so, by the mid-70s Arty felt the need for a change and, although he had been making a good living on the showband circuit, he quit.

Around that time, Arty began to work with Paul Brady, who was using lots of different open tunings to accompany Irish music and songs, and Arty credits him as the person who “stimulated” him to play Irish traditional music again, and the person who paved the way for the guitar in that genre of music.  He was also encouraged by Belfast singer and broadcaster, David Hammond.

Pretty soon, Arty had recorded his seminal album, McGlynn’s Fancy, released in 1979, which remains one of the classics of Irish music.  Playing lead guitar for traditional Irish tunes was somewhat revolutionary and, as his reputation developed, he redefined the role of the guitar in Irish music completely.  To this day, if you ask Irish musicians who they would rank as the best player in Irish circles, Arty’s name will come up time and again.

Over the years Arty played with just about everyone – Makem & Clancy, De Dannan, Liam O’Flynn, Patrick Street, Christy Moore, Four Men And A Dog, Donal Lunny, John Carty, Frances Black, Cathal Hayden, to name but a few. He certainly seemed to be everyone’s guitar player of choice.  He also recorded and toured for many years with his wife, fiddle player Nollaig Casey.  In recent years, the couple joined forces with Nollaig’s sister Máire Ní Chathasaigh and her husband Chris Newman (himself a pretty formidable guitar player) to form The Heartstring Quartet.

As well as playing in the traditional field, Arty played for seven years in Van Morrison’s band, recording on three of his albums including the influential Avalon Sunset.  In 2018 he released another solo album, Botera, which showcased Arty’s more eclectic musical tastes, particularly in the jazz field, and even sees him playing the tenor sax.  In addition, he was a gifted composer, arranger and producer and, in 2016, he received the Lifetime Achievement Gradam Ceoil from TG4 – a great honour in Irish traditional circles.

Arty was one of the finest guitar players… scratch that, one of the finest musicians ever to grace the stages of Ireland.  A musician’s musician, he will be remembered fondly, and his influence will be heard in the music of others for many generations to come.