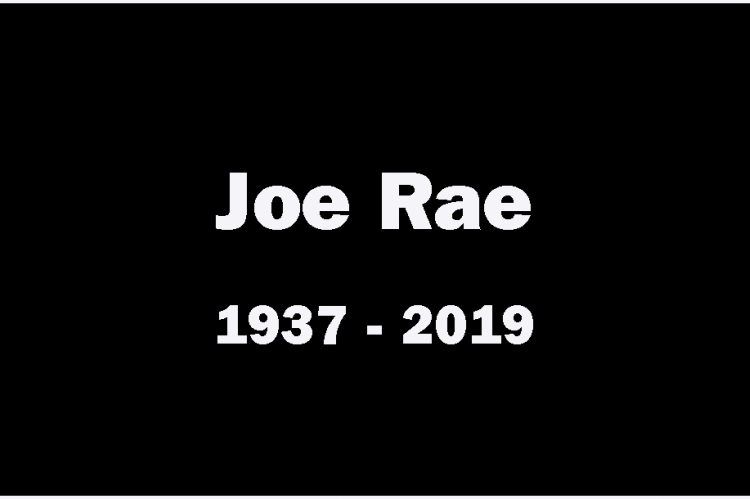 Joe Rae, who died just six days short of his 82nd birthday on 13th December, possessed an astonishingly wide range of Scotland’s traditional knowledge. He was a quiet, modest man who didn’t often perform in public and so is relatively unknown even within the folk music community. His songs and stories had power and relevance because they came from an unrivalled depth and width of experience and knowledge of Scotland’s history, crafts, traditions, language and culture. His sister always claimed he must have had, “Made in Scotland”, stamped on him somewhere. It is not possible to evaluate the loss of Joe as a tradition bearer without understanding this background.

Joe is one of a dwindling band of singers and tellers of stories learned in the traditional way, at the feet of an older generation. His material came not from recordings, radio or television, but from the age-old oral tradition. Joe was brought up among people who made their own music. His parents and grandparents were all keen singers, as were neighbours and others who the young Joe encountered in everyday life. Surrounded by so much inspiration and material, Joe simply absorbed everything around him and continued the tradition. He spent a lot of time with his maternal grandfather, John Rogerson, a very well-read Galloway shepherd, who kept Joe enthralled for hours with his songs and stories. In later years Joe would drive him back to the very remote parts of Galloway and get him to talk about his life growing up living and working in some of the most isolated places in the country. Surrounded by traditional music, it was natural that Joe’s interest in singing started early. His abilities as an instrumentalist, however, are less well known. Like many of his generation, his first musical instrument was a Jew's harp. He graduated to the mouth organ - he always had one in his pocket.

Joe was not just one of the few remaining singers and storytellers who could genuinely be described as coming from the oral tradition, he also came, by choice, from an earlier way of living. As a society we tend not to value, or preserve, traditional skills in the same way as the spoken, written or sung word. Joe’s knowledge of Scotland’s traditional building methods was encyclopaedic and should have been better recorded. Woodworking was Joe’s particular passion. He made his living from working with wood, specialising in jobs others couldn’t undertake. He not only knew the names of almost forgotten timber joints, he understood when to use them, how to make them and was a master of the often-complex geometry behind them.

Joe was at heart, like many true country people, an anarchist. Working for himself fitted in nicely. He had the ability to work very hard for very long hours, without rest or sustenance, sometimes to the annoyance of the neighbours, but he could also take as much time off as he pleased to indulge his many other interests. His proud boast was that he never owned a watch and, as a consequence, he developed the ability to judge time with an uncanny accuracy. His country attitude to time could, however, sometimes prove frustrating for his customers, one of whom once told him that she had no objection to his not having a watch, but she would appreciate it if he could get a calendar!

Joe’s connections with the wider folk music community came initially through the early folk festivals, in particular Newcastleton, where he was seemingly built in with the bricks, and the Kilmarnock Folk Club where he was a regular from the mid-seventies. Pete Heywood, who was the club organiser at that time recalls: “I think it is fair to say that most people in the folk club didn’t really recognise the ‘tradition bearer’ in our midst, or fully appreciate the depth of Joe’s knowledge or repertoire. That came later.”

Like many custodians of the oral tradition, Joe didn’t initially appreciate the value of what he had.  For him it was just part of life. This changed when he began to sing at folk festivals and the folk club, where his unique repertoire was increasingly recognised. In the mid 1990’s Sheila Douglas published some of his songs and this led to wider recognition. The School of Scottish Studies invited him to record his unique songs and stories, so that they could be archived for posterity. It was something that gave him great pleasure, knowing now that his precious material would be available to future generations. He had been learning his material from when he was a boy, and for it to be lost filled him with horror. Scotland would be losing an essential part of its heritage. In more recent years Joe became a regular contributor to events at the Scottish Storytelling Centre in Edinburgh.

Given Joe’s reticence about performing in front of large audiences, it is not surprising that only one commercially available recording of Joe’s songs and stories was ever made. He had learned much of his material at a fireside, so it was especially appropriate that he should be recorded, in 2001, at his own fireside in Cauldhame by Mike Yates for Rod Stradling’s Musical Traditions label. In the sleeve notes to the CD, Mike Yates wrote: “Joe Rae is a proud, if extremely modest, bearer of his country’s traditions. He belongs to a rapidly dwindling band of people who, had he lived in Japan, would have been designated ‘A Living National Treasure’. The pity is we do not put enough value on people like Joe.”

This brief appreciation of Joe was compiled by Graham Kennison, a family friend. Graham acknowledges information provided by Rod Stradling.