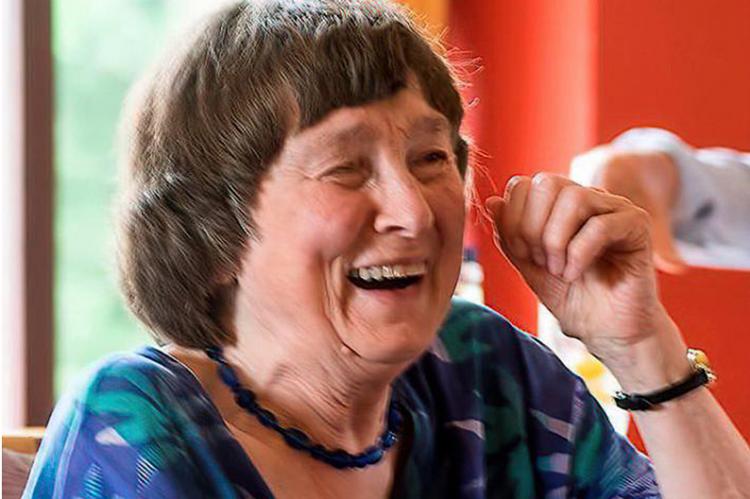 Born Marion Alexandra Wilson in St Albans in 1940, Sandra attended Teachers Training College in Brighton then studied English Literature at University of Hull in 1963. Her interest in folk music began in the late 1950s when she was introduced to the folk scene by Mary McGannon, a fellow teacher who was running a folk club in Luton.

Born Marion Alexandra Wilson in St Albans in 1940, Sandra attended Teachers Training College in Brighton then studied English Literature at University of Hull in 1963. Her interest in folk music began in the late 1950s when she was introduced to the folk scene by Mary McGannon, a fellow teacher who was running a folk club in Luton.

In the late 60s she moved to Brighton and married Lawrence Goddard, with daughter Jo coming along in 1969. Although she was busy teaching and looking after Jo, she began singing unaccompanied and becoming part of the folk scene in Brighton.  Lucy came along in 1973 and, with family in tow, she followed the Chanctonbury Ring Morris Men and Knots of May, attending Sidmouth and South Hill Park folk festivals, among others. Following the Morris was sometimes quite funny – one time the CRMM’s Dragon bit her thumb! She took the family to apple howling in Bolney, Long Rope skipping in Alciston and Boxing Day at the Marquis of Granby in Sompting. Jo and Lucy remember the rousing First of May Mornings in Shoreham, getting up at 5am for breakfast and singing in the church hall. Since moving to Lewes, Sandra saw the May in at Firle Beacon, staying up all night to be sure to be on time for the dawn!

In early 1980s, Sandra and Lawrence, along with Jim Marshall, Vic Smith and others, took over the Friday Night Folk Club at the Springfield Pub in Brighton (from Jackie Whyte). Jo remembers being put to bed on a pile of coats at the Springfield on many occasions; it was a great pub, run by Jimmy and Heather.  Sandra also helped run clubs at The Stanford, The Ram, The Thatch, The Oak – these are a story of their own – check out Sussex Folk by Clive Bennett, a good book that some readers may know.

After the club nights, musicians stayed at Sandra and Lawrence’s house – sometimes singing in the garden the next day where, despite the night before, they were still able to hold a tune! Through folk music Sandra made many friends who played an important part in her life - Jerry Jordan, Alice Purnell, Jane Princhett, Valmai and Meic Goodyear, Elizabeth Rimmington, Vic and Tina Smith, Don Morgan, Vic and Sheila Gammon, Leon and Jack Hogsden.  Jo and Lucy met and heard some great singers, including Pete and Chris Coe, Louis and Sally Killen, The Watersons, Martin Carthy, Mary-Eagle from Iowa, Terry Masterson, and others no longer with us - Fred Jordan, Cyril Phillips, Johnny Doughty, Ron Spicer, Sarah Morgan, the Moquets, Miles Wootton.

In 1984 Sandra moved to Lewes, partly to attend the local Quaker meeting house, and also to be closer to the Lewes folk scene. She played a part in the Lewes Saturday Folk Club, Royal Oak Folk Clubs, the Ram at Firle. For many decades, she also sang carols in Hope In The Valley and also Shepherds Arise, and we were happy to hear their voices at the Celebration of Life for Sandra in Ringmer.

Sandra was an intrepid and fearless driver - one year she drove Scan Tester to Sidmouth, much to her mother’s disapproval!  She also travelled to both Ireland and Scotland to attend folk festivals there, sometimes hitching a lift between the pubs, another tradition that Jo has taken up! Although she had some huge challenges with her health, she always managed to get out to the clubs and singarounds, even driving to Sidmouth in 2019 in the middle of moving to her new house.

When Sandra retired from full time teaching, she started teaching at home; she really saw teaching as a lifelong job. She took this into the folk clubs and got many singers to learn new songs and supported them in overcoming their performance nerves. Months on from her passing, we are now hearing from many singers to whom she gave encouragement in this way.

In 2006, her grandson Harlan arrived, with Wulfran in 2009, and the boys grew up with her close by - she took them to folk clubs, classical music concerts and country walks in Sussex. She encouraged them to take an interest in music and nature and they were always bringing back owl pellets and animal bones from their walks.

Her recent move out of Spring Gardens to St Thomas Court was a challenge, but with support from Jo and a big team of helpers she got moved in by Bonfire Night as they promised her. Soon she was enjoying the activities in her new home and really liked watching the sunset over Lewes Castle and the view of the Harveys Brewery from her balcony.

Lewes Bonfire Night was a big favourite of Sandra’s. The Barrel Runs in Cliffe was her best part of the night and it was priceless for her family to have shared that with her last year, watching it with cake, chips and Harveys for the drinkers - mum barely drank, although she did like the occasional sherry.  Never adverse to making requests, on Bonfire Night she asked a passing musician, Georgina Wright, to play The Braes O' Balquhidder on her accordion so Sandra could sing along. It was the last song her family heard her sing.

Although she could be the most infuriating person, she was also a good teacher and a great friend to so many of the people she met. She loved to leave a nice long answerphone message – often using up the whole tape in the process! She held music parties at Spring Gardens and had even managed to have a small singaround in her new flat, among all the boxes.

She was able to strike up a song with strangers and share her knowledge with others. She gave encouragement to us to explore the unusual, to hold onto the traditions we follow and to create new traditions of our own. We will miss Sandra and will be hard pressed to find another person in our lives who is such a feisty, friendly and inspiring individual.  We are grateful that she introduced us to folk music and at Sandra’s Celebration of Life on 29th November, many hours of her favourite folk songs were performed. As we said at the time, the singing was like the rafters of a barn above us, and the timbers of a ship beneath us. My sister and I really enjoyed hearing the songs that were the soundtrack to our childhoods.

Jo is setting up a folk archive to share Sandra’s songs at  http://www.wuntbedruv.com